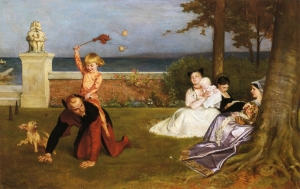 The author’s ignorance of historical matters artistic will show through as the light of the Last Judgement over Patmos, but one subject that came to mind today was the issue of ‘fan art’ and its precursors or prototypes in the History of Art. It would be easy to reduce fan art to an invention of the digital natives, or at the very least a product of twentieth century mass culture and mass communications. Drawing one’s own conceptions of images from cinema or television is a hobby of any child raised with a visual medium as a major influence alongside those of creative disciplines. For me, that meant drawing my own reimaginings of the Death Star Attack and the Batte of Endor with felt tip pens. The freedom to extrapolate an existing license or canon of ltierature, film, television or otherwise and add one’s own spin has been the impulse behind the world of fan fiction and Live Action Role-Playing in vast subcultures of ‘fandom’, as well as the titular subject of fan art.

However, is fan art something which came into existence only with mass culture and the age of comic books and the cinema screen? Fandom as a social force existed before the movie camera; the hounding of Sir Arthur Conan-Doyle following his decision to send Sherlock Holmes falling to his death is known well enough, though authors long before Doyle had legions of devoted followers. Goethe’s novel The Sorrows of Young Werther became famous for the wrong reasons after a wave of copycat suicides were attributed to young men in depsondency deciding to emulate the character in dress, philosophy and self-destruction. This behaviour was subsequently named the ‘Werther effect’ in 1974 by the American sociologist David Phillips. Modern studies have challenged the extent to which media reporting and the power of suggestion influence the overall rate of suicides, as well as the number of suicides causally linked to the novel itself in the late 1700s, but the power that Goethe’s novel held over some of its fans was one approaching religious fervour. Among those who did not follow Werther’s pistol-based solution to rejection, the character remained an endearing hero for the bitter and unrequited. Antecedent to the bard Morrissey, doth thou not concur?

Fandoms are understudied social movements; the impact they can have on cultural evolution in the long term can be immense. Arnold Schwarzenegger would unlikely have risen to the public prominence which allowed him to sweep into the California Governor’s mansion had it not been for truck driver and future Terminator creator-director James Cameron’s obsession with emulating 2001: A Space Odyssey and Star Wars, resulting in his aggressive advance through the film industry. The enduring devotional power of fandoms to have killed-off characters resurrected or entire series returned to publication and airtime (think the original Sherlock Holmes and his current Cumberbatchian iterations as well as Futurama and Family Guy) is a force to be reckoned with that historians have paid relatively little attention to cf. labour movements, permanently rising middle classes and social activist groups. Something for the future, perhaps.

But away from this and to the matter of fan art. If fandoms existed before the term itself entered the lexicon and before ‘fans’ would even self-identify as such, could their artisitc proclivities have done so likewise? This is an area that, were the author an art historian, it would be consuming a great deal of my time in the library. We know the famous trope, established most prominently by journalist and full-time science-denying crackpot Christopher Booker of there being only five, six or seven at the most core stories that are adapted and retold across every culture. There may be some weight in it – the Hero Archetype of Joseph Campbell generally holds up under scrutiny at the very least. But the fact remains that the adaptive storytelling practices of humankind have made it possible for Shakespeare and Milton to retell older chronicle-histories, ballads and folklore as dramatic catastrophes and centuries later have their theatrical versions reshaped and retold by Hollywood and Broadway. Humans of every generation adapt the fictions and histories of old for their own purposes. Among the reinvention is the adding, subtracting and division of characters. Entire scenes are invented and when juxtaposed with the source material, the process can be consternating. Dramatic license can quite literally be a license to kill (entire dynasties who actually lived) and a license to conjure. Shakespeare worked from adaptation and invention, though his deployment of familiar characters from earlier works and the use of earlier dramatic structures (medieval morality plays influenced the presentation of the monstrous Duke of Gloucester in Richard III and his soliloquies) draws the lines for a brutal fisticuffs over whether the he undertook ‘fan fiction’ of a kind.

What merits consideration is the place of art in all of this. Shakespeare, who “departs from his source materials repeatedly” (in relation to Coriolanus in the linked accessible example) was not above inventing entire scenes that existed not in the historical or dramatic sources from which he worked. In the dramatic cases it was probably beneficial; though no copyright laws as modernity knows them existed at the time, originality and innovation are why we study Shakespeare and not the poems of Rupert Brooke with such intensity. So what of the artistic depictions of dramatic works? The inspirations for portraiture and draughtsmanship found in the works of Shakespeare himsef provide one of the most illuminating examples.

Now to the titular matter. It should be worth pointing out that this idea came to me whilst looking through the vast interconnecting fandoms on dedicated social networking platforms for, among other things, the Harry Potter series, Star Wars, Sherlock, Star Trek and the plethora of popular works that encapsulate the attentive fantasy and focus of the Millennial generation. Of course fandoms for these and countless other works existed before the age of the online fan forum but modernity gifts such ease of access to the inner workings of fan minds. Fan art, particularly the representation of imagined scenes from established canons, ranks hugely in popularity in fan communities. Imagined backstories, uncanonical actions by characters and the meeting of impossibly separated individuals, whether by crossover or resurrection from the canonical dead, are standard fare in the genre. It is difficult to believe, given the long pedigree of adaptive and creative license taken in literature and drama for centuries before the advent of modern communications, that this genre of artistic expression was itself merely a by-product of digital modernity.

The one exceedingly good example of this wroking thesis aforementioned is the 1868 painting by Phillip H. Calderon, The Young Lord Hamlet. The traditional depiction of scenes from the stage play are dispensed with in favour of something radically different. Hamlet is seen playing with Yorick the jester as a child, as family look on. Happier times. This memory or something resembling it is merely alluded to in the ‘gravedigger scene’ of Act V, Scene 1 in the play Hamlet, Prince of Denmark and not even indirectly depicted besides the reference made by Hamlet’s speech:

“… he hath
borne me on his back a thousand times; and now, how
abhorred in my imagination it is!”

Could Calderon’s work be among the first examples of truly imaginative ‘fan art’? Taking an unstaged scene, drawing the entire foundations of a painting from one stanza in the tragedy would not be out of place among Tumblr pages dedicated to the unknown histories of various Doctor Who villains, the lovelorn youth of Professor Snape or imaginings of Luke Skywalker’s boyhood on Tatooine. Is the Calderon imagining of Yorick and Hamlet among the first of its kind? Nestled among the work of the Pre-Rafaelites of the later nineteenth century could be the starting-point of devotional fan art extending beyond the parameters of canonical authority.

With the help of fellow postulators on Reddit, I have located the works of John William Waterhouse in a similar context. An artist in the post-Pre-Raphaelite vogue (they ought to have found better prefixes and placeholders for their clubhouse name), Waterhouse was immensely fond of classical and mythic subjects, especially women. Among his forays into myth-making with historical characters are his The Remorse of Nero After the Murder of his Mother in addition to his Shakespearean portraiture which includes a consistent fondness for Ophelia.

This midnight rambling has gotten to the ghost of a point. Was there a genus of the modern fan-art phenomenon within the pre-Rafaelite movement? Did it begin even earlier? Again, there has been comparably little historical study of this when one considers the energy expended upon textual criticism of the plays of Shakespeare, Marlowe and Middleton or the career-bending controversies thrown up over two centuries of the Stratfordian Question (like creationism and climate change denial, most scholarly effort has been sunk into rebutting the curve-arrow claims of cranks and crankhood, fired from the high parapets of quackdemia). Nor has there been much social history done on the issue of fandoms, again treated mainly by sociologists in their contemporary contexts.

Treat this, as you like it, as a placemark for future research. The question of what constitutes ‘fan art’ and whether a chronology can be developed based on the work of the pre-Rafaelites will be of interest to the author for some time to come!

Politics is war without bloodshed.

Home of Stephen Knight and The #GSPodcast

Christianity in Antiquity (CIA): The Bart Ehrman Blog
The Library of William Morris